The pun is dreadful, I know that, but it makes sense.

I’m back in Kampala after 3 days on the road and on Safari at the Queen Elizabeth National Park.

Having checked out of our hotel and travelling for nearly 9 hours in total (which included a stop off at the Equator) to get to the Enganzi Game Lodge, our group settled and got used to our surroundings. The lodges themselves were of good quality, though this would be the first experience without strong WiFi or air conditioning. Plus, electricity was not always constant, amplifying the various animal noises in the area.

As expected, there were more animals, bugs and reptiles freely roaming around, the space as much theirs as anyone else. The next day was the main event- the big Safari drive, where hopefully, we could see an elephant and lion up close.

As mentioned before, it involved an extensive drive through Queen Elizabeth National Park, the same park that the American tourist, Kimberley Sue Endicott, and a Ugandan tour guide, were kidnapped a few weeks ago. But, by virtue of you reading this, that was not our fate 🙌🏿

In fairness, that was a rare occurrence, and hopefully they don’t lose much business over it. Indeed, none of us really feared it would happen, and didn’t think about it. Especially when we started seeing animals, such as deer, and monkeys.

Following a quick stop off, where we got to photo the landscape and a big ol’ sign, we headed off into the main park, where we drove extensively and took in many sights and animals. But still, we longed to see an elephant and a lion up close.

We went on foot to a lake where the Democratic Republic of Congo lay just about 20 metres on the other side. There lay (and played) hippos.

Back in the van, and with time going, we were still determined to see either or both of the stated animals.

With more driving, time was almost gone and while the rest of us may have accepted that we may not see a lion or elephant up close, a couple of people in our group persevered and we went one one more turning in the park, and just then…

Large and dark rain clouds were forming, so the relative darkness made me think we were not seeing what was there. Then, the driver turned the tour van off the main track into another area, and sure enough, there were cubs. No sooner had we seen that, the male lion (who’s name I then found out is Jacob) was seen and our tour van actually burst into spontaneous applause.

Even me, who could give or take a safari before this holiday, was excited. Photos and videos below:

After that, we went on to our next location. Lake George (Uganda) and Lake Edward (Uganda and Congo) where we rode a small motorised boat and were guided around the wildlife and animals that lived and frequented the lake. Such as elephants, water buffalo, white kingfishers, hippos, white-chested eagles, lizards, monkeys and a very big crocodile that went into the lake from the bank upon seeing our boat 😳 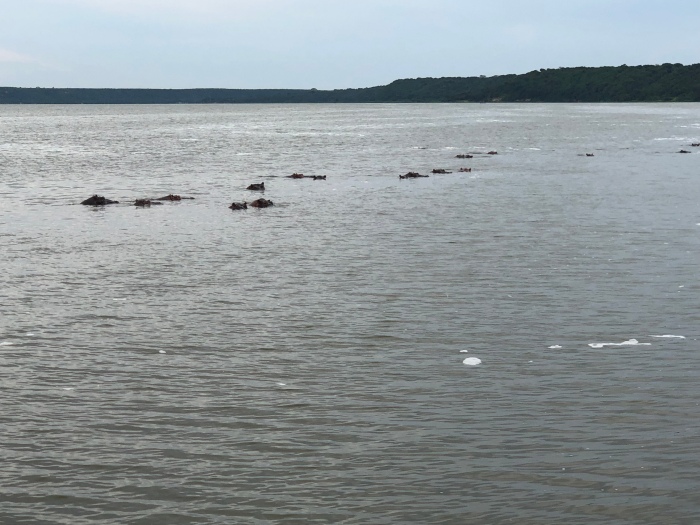 As if the day couldn’t get any better, we were driving back to the lodge, in the road, when crossing, swagger like you wouldn’t believe, was an elephant. Sadly, another vehicle overtook ours, creating a cloud of dust. By the time the van and cloud had disappeared, so had the elephant.

Upon returning to the lodge (and by way of wrapping up the query raised in the post ‘An Epic of Cyclone Proportions) we decided that the lack of information and uncertainty over the weather and the ferry services from Tanzania to Zanzibar meant we should cut our losses and seek accommodation back in Kampala, where we will remain until our return to the U.K

But the day (and experience) is one that felt amazing, more than I expected it to. And that was, in part down to what we could see… see 😉 but ultimately down to PURRseverance 🦁…

Thank you for reading.

View all posts by lanrefiction